So last Friday I had a heart attack. How utterly ridiculous that sounds…especially saying it out loud. I’m 40 for fuck’s sake. I was training for a half marathon. I’ve run marathons before. I’m fit. My resting heart rate is 50-60 beats per minute, my blood pressure is about 110/60 and my cholesterol is 4.4.

Turns out being “healthy” is probably what saved me.

The cause was a tiny tear in a ventricle in the left side of my heart which works at 49% of the normal 55% rate.

I’ve never written a blog before but I’m a journalist. I’ve worked for the BBC for 20 years. Writing is what I know. Vocalising and putting it down in black and white is the only conceivable way I can think to heal myself. So here I am.

Right now I can only say things bit by bit as reliving the whole terrifying experience makes my chest hurt…and then I fear it’s happening again…and then I start to cry. I really don’t do crying but I guess I must. So, I think I’ll start small.

This blog is not just about fixing me mentally but making sure you are aware of how important it is to know the warning signs. If it helps just one of you, having gone through it myself will have been somewhat worthwhile.

Let me tell you now you’re not safe, none of us are. We think we’re in control of our bodies but it’s our organs that have the reins.

I just want to start today by telling you how it was for me. My heart attack was minor. A Type 2 as my cardiologist described it. I thought I’d had an allergic reaction. I even told my husband, Andre, to stay at home when the ambulance transported me off to hospital, reassuring him I’d get a taxi home when I was discharged with nothing more than the equivalent of a plaster.

It was the end of the week and I’d been due to run five miles as part of my London Landmarks Half Marathon training regime. But I was tired, part of me wondered whether I would be able to compete at all. It’s the first time I’d felt like that. I’d run 10 miles the previous week and felt fantastic. I’d even done two three-mile runs, a four-mile walk and played netball that week.

The plan had been to go out with my running buddies Sophie and Ruth but they both cancelled for various reasons…and thank God they did. I had still thought I might go out pounding the pavement but it was drizzly and cold and the invitation to join my friend CJ for a glass of red was much more tempting after a busy working week.

So there I was, sipping my second glass of Merlot when every single muscle from the bottom of my rib cage to the top of my chin went into spasm. As they tightened harder and deeper I tried to loosen off those in my shoulders…rolling them, massaging them with my fingertips, lifting up my arms. I felt like every part of that section of my body had indigestion. How mad is that? Yep, definitely an allergic reaction, I thought. It couldn’t possibly be anything else. 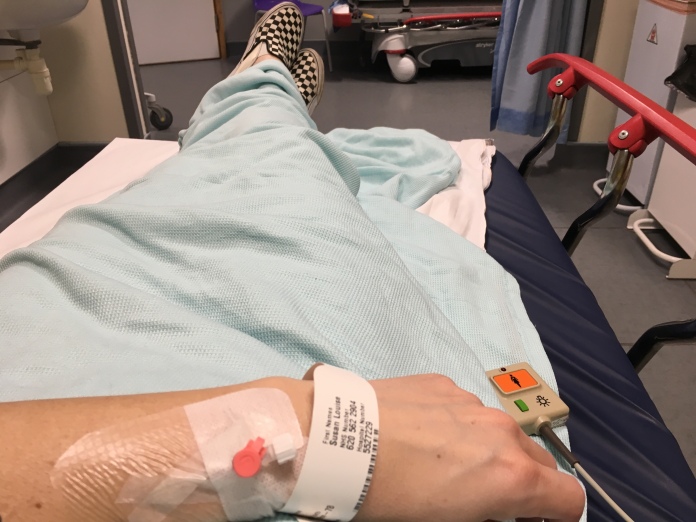 I then did probably the most stupid thing I could have…I made an excuse about being tired and left. I was in a safe place, with a great friend. But like a dying animal I took myself off. I pulled on my boots and tied up the laces as quickly as possible, barely able to breathe while bending over. I exited the house and started to walk the 300 metres back home. Vulnerable.

I got halfway up the hill between the two streets and I had to call Andre. My arms felt like someone had strapped an anchor to each of them, I couldn’t prise them from my sides and I could barely carry my handbag…which admittedly is like a cement bucket, but even so.

When finally and safely on the sofa at home and awaiting the paramedics, I asked Andre to massage my back and shoulders. It was the only thing that helped ease the constricting sensation, though it didn’t actually let up for about 45 minutes to an hour.

It was at this point I admitted I’d felt that hideous discomfort before…for about five minutes while sitting on a train. I’d put that episode down to carrying a heavy bag. Maybe I’d pulled a muscle.

The more I thought about it I realised there had been two more occasions when I’d had similar warnings. Both of these happened while I was out running with my friends. The sensations hadn’t been as central and were more left-sided. I noticed I had a stiff neck and muscular pain in my left shoulder blade and I was forced to swap the mobile phone running strap from my left arm to my right, as my left felt restricted. But the weather was freezing so it must have been that, right? I must have been tensing up to keep warm. I then asked Sophie if we could walk up the final hill home as the twinge was worsening. She asked if I was alright, to which I replied with a smirk: “It’s ok, it’s not as if I’m not having a heart attack or anything.”

The irony is not lost on me.